I did a ‘Mixed Media’ workshop with Janie Barker on the weekend. I took along my oil pastels…which until about 2 weeks ago, had not been touched for years!

They were waiting for me like great old friends…and  once we got over the initial awkwardeness and questions like, “how long has it been? No, really, a whole decade? It only seems like yesterday…. “, we got along famously.

I learned a whole bunch in the morning session combining oil pastel with cheap Quink ink. A technique that I really loved. These are my little practice blobs and study of a painting. For the afternoon session Janie planned for us to use turpentine for some different techniques. She had organised a lovely selection of images to choose from for reference and she mentioned some magazine pages that featured colourful bugs that I would like. Many of her students have painted the various bugs from these pages over the years…

When she pulled out the pages, I recognised them straight away! They were mine! Way back from a feature in the Woman’s Weekly in 2003, at the beginning of my photographic art career…isn’t that a hoot?! Now, this was one of the first times my work was published, and it was with the biggest selling magazine in Australia, so I was pretty thrilled! But it also taught me a few good lessons! Now I always make sure my name gets included PROMINENTLY wherever my images are used. This has my name buried right in the binding, printed very, very small. At the time the magazine came out, I had so many concerned friends contact me to tell me someone was copying my style! I learned to ask questions and get those answers in writing.

Anyway, back to Saturday’s class!  I selected one of my ladybird photographs, as I have always thought it would be cool to paint one of my photographs.

And proceeded to use oil pastel and turps to recreate my artwork. I discovered two things.

1. I just didn’t engage with  recreating whats in front of me. For this workshop it was a great excercise, but recreating something that already exists holds no juice for me. I found it exhausting. It went on forever…. So, been there, done that, checked that box! I prefer to live with Bucks Fizz “In the land of make believe”. I believe eliminating what you don’t like/aren’t interested in is just as important as finding what makes your eyes boggle wide.

2. I really dig oil pastels. They are JUICY and bold. I feel a bit invincible with them in my hand. And the whole crayon thing is comforting at the same time. Its a medium I had plenty of practice with as a child.  (I just saw my Senneliers spinning in their box at being compared to Crayolas.  I can hear them grumbling ” Mon Dieu! They are wax! Have you no respect!?!”.)

I have been lurking on the online art shops, sizing up Sennelier and Caran D’ache oil pastels. Even made a furtive bid on ebay for a set…and have decided to add a few oil pastels to my collection. But I promise I won’t leave them for 10 years before using them again!

Have you tinkered with oil pastels? I would love some brand and color recommendations…it’s a bit of pot luck ordering from colour charts of the net! Art, Art Life, Aside, Uncategorized
Because I think art speaks for itself, I rarely talk about my artwork.Of course I share my artwork on a daily basis, ...
Read Now 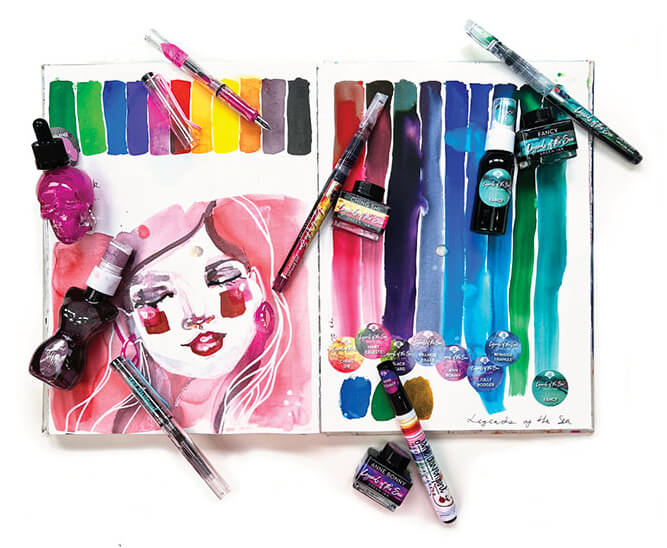